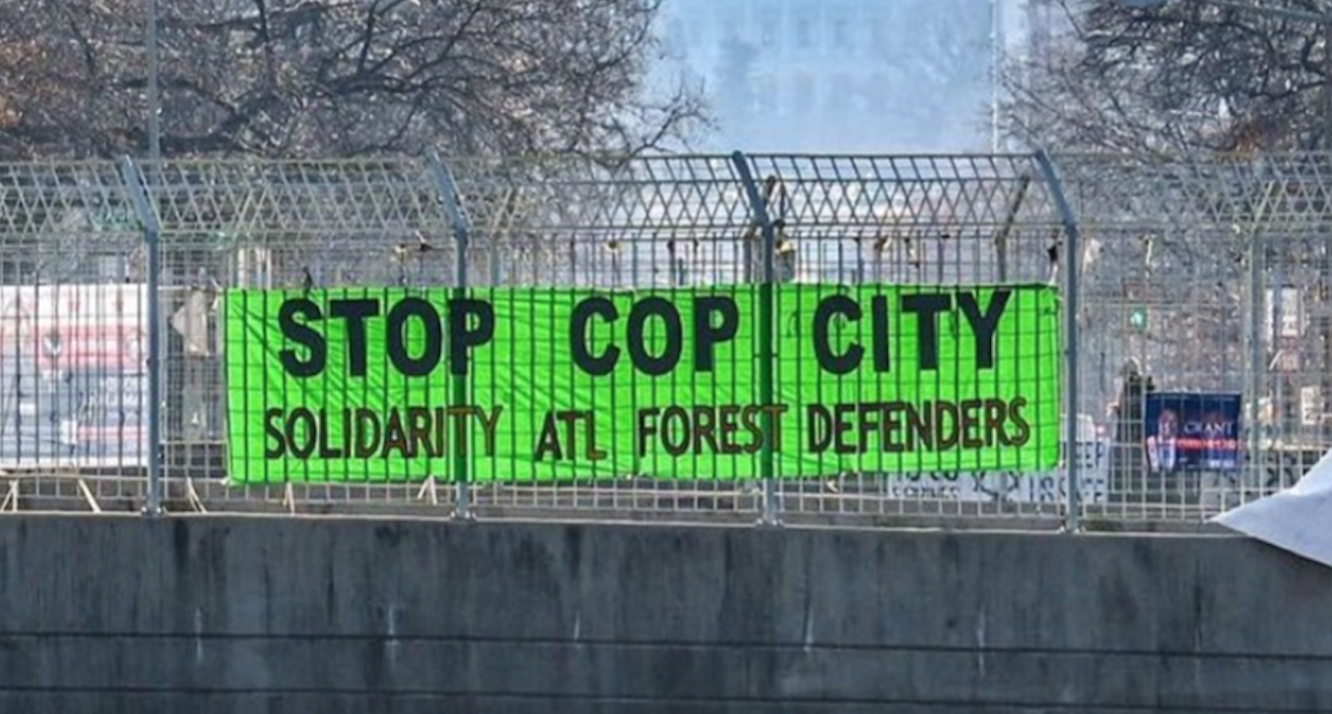 Armored transport tanks, police vans and Bobcat tractors amass around the Atlanta Forest on December 13th, 2022, in Atlanta Georgia, USA. Riot police and paramilitary Special Weapons and Tactics (SWAT) teams raid the Atlanta Forest to attack land defenders, their toilets and kitchen. Shooting tear gas, plastic bullets and armed with assault rifles, they begin tearing down tree houses and other amenities. The police invasion was targeting people inhabiting the forest to prevent its destruction. “The great thing also,” explains forest defender ‘Fruit Bat’, “is that you don’t have to destroy the tree to live in it.” Since the George Floyd uprising, forest defenders have been organizing and fighting to defend the Atlanta Forest against the Atlanta Police Foundation’s construction of a 300 acre (121.4 hectares) urban warfare tactical police training facility—known as “Cop City”—and another 170 acre (68.8 hectares) Blackhall Studios film lot. This development strains existing ecosystems, and invades the predominately black and remaining traditional neighborhoods of Atlanta.

The December 13th raid detained 12 people, while on Tuesday, December 27th, six people were charged with domestic terrorism and granted bail totaling $51,000 USD. This included probation and preventing contact between co-defendants. People continue to protest construction by obstructing excavators, while numerous other local and national solidarity actions spread across the US. This includes arson against Blackhall (aka Shadowbox) studios. The Defend the Atlanta Forest (DTAF) struggle remains impressive on numerous fronts, as will be briefly outlined below, but how does this fight relate to the ideas and concepts of degrowth?

On one hand, this struggle has NOTHING to do with degrowth. Degrowth ideas, in the official sense, have remained marginal within the United States and, more importantly, the DTAF struggle is fueled by anarchist and autonomous politics infused with the Black Radical Tradition and Environmental Justice. While degrowth has made recent efforts to develop political strategy and embrace “rupture as a mode of transformation,” the DTAF struggle departs from the reformism dominant within degrowth, which has expressed itself by focusing on public policy, neglecting anarchist struggles and the militant aspects of environmental conflicts. On the other hand, DTAF struggle has EVERYTHING to do with degrowth values, such as autonomy, care, conviviality, democracy, and equity. Ideas of socio-ecological reciprocity, conviviality and self-defense are rooted strongly within this struggle, which is a living practice that is attempting to save a forest, but also—and relevant to degrowth—reduce material production and energy consumption emanating from arms, police and entertainment industries. DTAF struggle remains an opportunity—like the LobauBleibt movement, Hambach Forest struggle, Zone-to-Defend (ZAD), No High-Tension Power line (NoMAT) and No High-Speed Train (NoTAV) movements before it—to see what degrowth values look like in practice. In order to better understand “rupture” as a method of social transformation, degrowth can learn from the fight to defend the Atlanta forest.

The Beauty of Land Defense

The Atlanta Forest contains a sordid past. Originally stolen from Muscogee Creek people to create a  slave plantation, the land would eventually host a prison farm. Currently, a juvenile detention facility and police shooting range occupy a part of the land, which the Atlanta Police want to expand into a police urban warfare training complex. Likely a reaction to the George Floyd protests, this proposed plan will consume some of the last forested green space in Atlanta. This conspiracy to kill the forest, however, has been halted, not by the “the big green state” but by land defenders living in the forest, engaging in direct action and organizing with nearby residents. Forest defense embodies the aspirations of degrowth values, engaging in a process of self-organization to assert autonomy, organize networks of mutual aid and self-care as well as employing convivial infrastructures that co-habitate with the ecosystem. According to one anonymous defender, the forest has “become the frequent site of dinners, bonfires, gatherings, movie screenings, performances, art installations, and skillshares.” The DTAF struggle has been organized horizontally, drawing on ideas of direct democracy but not limited by these formalities. “This movement has grown into a broad, decentralized, mass struggle,” explains another Defender, “[i]ts openness allows for an independence of action which can be taken up by anyone who chooses to pursue the overarching goal of the movement: to stop the demolition of the forest.”

The struggle, moreover, is a direct obstruction to the expansion of material and energy intensive infrastructures—in production and operation—but also the institutions of domestic warfare. Forest defenders and local communities are fighting to preserve trees and local ecosystems, resisting the expansion of lethal capabilities of police forces in Georgia. The Atlanta police department killings are 36% above US averages, while between 2016-2018 there were “480 civilian complaints of police misconduct” and 50% of arrests between 2013-2021 were for “non-violent offenses.”  Forest defenders are trying to regrow convivial relationships and degrow extractive and coercive institutions.  And yet, they are branded as terrorists—this is absurd.

The DTAF movements’ strength comes from its implementation of solidarity and diversity of tactics. This entails creating multiple fronts of community organization and permanent conflict by living and defending the forest as well as public outreach. Once the land deal was announced for Cop City in Spring 2021, direct action was immediately taken to stop it — seven tractors and excavators were destroyed, initiating the movement and its militant tactics. “[T]here’s probably been 30 arsons (I’ve lost track) and countless other acts of sabotage,” reflects a land defender, “What’s striking is that none of this has been condemned by the wider movement, and I don’t think that would have been the case before the George Floyd uprising.”

Tactics have included constructing and burning barricades, tree spiking, tree sitting, and routine confrontation with police and construction workers. Quickly rebuilding treehouses and convivial structures after police raids and demolition was also instrumental. The movement's focus on autonomous and decentralized organization, according to a forest defender, “results in a highly complex ecology of struggle, where property destruction, arson, and clashes with police happen alongside music festivals, raves, barbecues, film screenings, all of which are free.” This also extends to  social infrastructures, such as free stores, food sharing points, and supply drives that have sustained the struggle. In other words, a culture of resistance has developed to save the Atlanta Forest.

Protest marches and rallies, which comprised of preschoolers and the wider community, also reinforced the DTAF struggle. Another activity was community participation and confrontation in city council meetings to make clear the rejection of the project by residents. To date, no political parties have taken up the fight against Cop City and Blackhall Studios. Rejecting this industry investment presumably conflicts with party interests. The DTAF struggle offers grassroots strategies for degrowth that complements, but also challenges the public policy, electoral and other reformist approaches which predominate within the degrowth movement. The DTAF struggle—like other struggles similar to it—can further inspire degrowth’s need to develop a practice of political rupture.

The Defend the Atlanta Forest (DTAF) struggle can serve as an inspirational example of how to create a degrowth practice. This struggle illuminates the importance of including anti-militarism and policing amongst core degrowth values. The DTAF self-organized struggle—and assertion of autonomy—provides an example of degrowth’s potential “strategic orientation” and engagement with the state. While degrowth remains diverse, with strong reformist tendencies and economically situated analysis, we cannot forget that state power relies on squashing genuine and unmediated degrowth. Capitalist growth is always protected by state power. Such entanglements are on full display in Atlanta where corporate, police, and state interests have become indistinguishable. Their collective effort is bent towards expanding an urban warfare center in the wake of widespread rebellion against racial and political injustice. Cop City, and the present socio-ecological trajectory, remains nothing short of an act of ecocide enforced by dominant institutions and their repressive forces. Supporting forest defense, promoting policies decriminalizing protest and direct action, and supporting militant land struggles against mines, infrastructure, entertainment industries and urban warfare training centers should remain front and center within the degrowth agenda.

Images to enrich the text can be found here , we could not embed in the body of the text due to a technical issue on our website currently.

Ways to support the struggle:

Alexander Dunlap is a postdoctoral research fellow at the Centre for Development and the Environment, University of Oslo. His work has critically examined police-military transformations, market-based conservation, wind energy development and extractive projects more generally in both Latin America and Europe. He has published the books, Renewing Destruction: Wind Energy Development, Conflict and Resistance in a Latin American Context (Rowman & Littlefield, 2019), the co-authored The Violent Technologies of Extraction: Political Ecology, Critical Agrarian Studies and the Capitalist Worldeater (Palgrave, 2020) and Enforcing Ecocide: Power, Policing and Planetary Militarization (Palgrave, 2022)

Hannah Kass is an ex-farmworker and joint Ph.D. student in the Department of Geography and The Nelson Institute for Environmental Studies at the University of Wisconsin-Madison. Her research focuses on food sovereignty movements, political agroecology, plantation geographies, anarchism, abolition, carcerality, agrarian political economy, and autonomous agri-food systems. Follow her on Twitter @hkasserole

Unless the future takes a bizarre turn, and humanity is united in one country under the flag of ‘DegrowthTopia’, in which the only ‘enemy’ that remains is the extra-terrestrial, the puzzle of how we relate and interact with those beyond our borders and communities will remain.

What does degrowth mean in the Latin American context? In 2020, a series of six self-organized encounters attempted to dive into this question. Each meeting reflected the metaphor of the agricultural process: from sowing to harvesting. Among the conclusions was a unanimous desire to put into practice ‘other ways of inhabiting the world’, valuing the knowledge of the original peoples and inhabit...

The need for an academic Degrowth journal

Degrowth is a thriving academic field, but one without a home. It can be a struggle to publish degrowth-related articles in the current journal environment. If successful, authors must often surrender the ownership of their work to commercial journals. After more than a decade of degrowth research, and with a growing number of scholars engaged in the field, we believe the time has come to start...