The impacts of a multimodal port on Colombia's Pacific coast 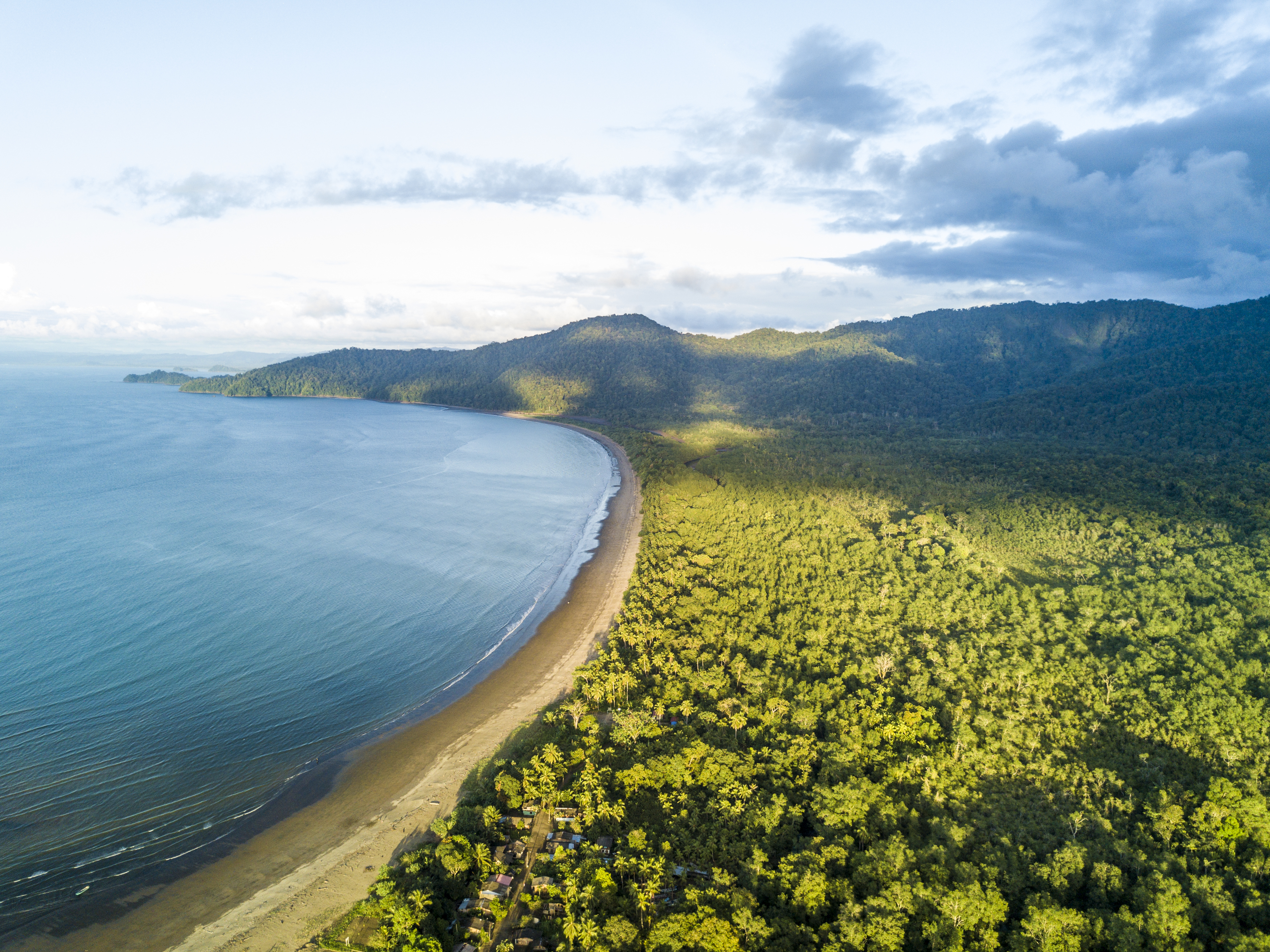 The Gulf of Tribugá is one of the world’s most pristine biodiversity hotspots. Photo Credits: Expedición Tribugá

The construction of a new port on the Pacific coast of Colombia poses a threat for the nurseries of Humpback whales as well as the habitat of hammerhead sharks and the livelihood of local communities. The dissension between those defending and condemning the project has sparked a nationwide dialogue about the impacts of building mega infrastructure projects in biodiversity hotspots. The Gulf of Tribugá is the name of the location selected by Sociedad Portuaria Arquímedes S.A. to build a multimodal deep water port complex, which not only encompasses docks with capacity for post-Panamax cargos[1] but also road corridors, railroads, and an oil pipeline. Although the idea is not new, the port policy of current President Iván Duque has given unprecedented support to its development. Despite the port could strengthen Colombia´s commodities exports to China, the project has been halted in its planning phase due to a lack of sufficient studies about the environment where the construction site would be located. Arquímedes S.A. has so far failed to provide an environmental diagnosis of the site that complies with the construction planning standards in Colombia.

Building Tribugá Port would entail the destruction of more than 550 hectares[2] of ocean and rainforest in one of the most biodiverse regions on the planet (See: Expedición Tribugá Documentary)[3]. Gulf of Tribugá is a diverse hot spot where Indigenous and Afro-Colombian communities have learned to coexist with wildlife in the sea and the jungle. Humpback whales come from the Antarctic to give birth in the deep warm waters of Colombia’s Pacific Ocean, other inhabitants of the Gulf are endangered species such as the olive ridley sea turtle (Lepidochelys olivacea) and the scalloped hammerhead shark (Sphyrna lewini). Seabirds, rays, squids, dolphins, and large fish also come to these waters to feast on the anchovies´ schools (Cetengraulis mysticetes).[4] Based on the number of endemic endangered species living here and their importance to securing the livelihood of local communities, the NGO Blue Mission declared the Gulf of Tribugá a "Hope Spot" for the conservation of life in the oceans.[5]

The Gulf is part of a corridor known as biogeographical Chocó, a region that encompasses the eastern region of Panamá, Colombia´s Pacific Coast, and Northwest Ecuador. Framed between the Pacific Ocean to the East and the Andes Mountain Range to the West biodiversity here is only comparable to that in the Amazon rainforest. Numerous endemic species of amphibians, reptiles, birds, reptiles, and trees thrive in the thick jungle surrounding the Gulf. A warm climate and countless rivers are also characteristic of Chocó, one of the rainiest places in the world.  There is still much to learn about the region´s biodiversity. As scientists are granted access to areas formerly controlled by illegal armed groups, new species are being discovered in what used to be the battleground of Colombia’s internal conflict.[6]

Building a port in the Gulf of Tribuga would also privilege the exploitation of commodities over existing regional development models led by local Afro and Indigenous communities. The construction site is under the jurisdiction of Nuquí’s municipality in Chocó, one of Colombia´s poorest states. According to the government´s statistics bureau (DANE), 65 percent of its population lives with Unsatisfied Basic Needs: around two-thirds of Chocó's inhabitants lack access to water, electricity, sanitation, education, or hospitals. "Today, in the 21st century, we do not have decent roads. Armed groups are present in the area, so people live in fear, and why? Because the state has not been present," said Bower Mosquera Montaño, a member of the Municipal Council of Quibdó, the capital of Chocó, in a broadcast organized by Sociedad Portuaria Arquímedes S.A.

Its stakeholders insist that the port will boost Colombia’s trade with Asia, reduce the cost of transporting goods, enhanced the living conditions of people in Chocó, and be environmentally sustainable. According to Diana Ruiz Pino, an oceanographer at the LOCEAN laboratory of the Sorbonne Université, there is no evidence of that. "It is not possible to say that a port is green or sustainable, those two things are incompatible. A port in Tribugá would affect the entire Pacific Ocean. We are talking about destroying the place where humpback whales come to reproduce, there will be damage to the neighboring Ensenada de Utría Natural Park".

In contrast, for Councilman Mosquera Montaño the port, its roads, and railroads are harbingers of improvements in the living conditions. However, the cases of Buenaventura and Tumaco, emblematic port cities in the Colombian Pacific, indicate that the construction of port infrastructure does not imply improvements in the living conditions of the local population. "Although there is a state presence as part of the administration and coordination of the port, this does not equate with social investment for projects that benefit the communities or with protection from illegal armed groups," says researcher Francisco Daza Vargas from Fundación Paz & Reconciliación (peace & reconciliation), a thinktank specialized in Colombia’s internal conflict. According to the country´s National Development Plan 2018-2022, in Tumaco and Buenaventura drug trafficking, violence, and lack of basic services continue to be a problem in spite of their ports.

Their understanding of the land they inhabit has led Afro and Indigenous communities to implement autonomous development models in Chocó that differ from those of the local and national state authorities. According to Josefina Klinger, former director of the community-based tourism agency A Mano Cambiada (lending hand), Colombia’s and Chocó’s governments approach development through imitation while overlooking self-appreciation: “In Colombia we still associate the nature, the jungle, the water, the rivers and the sea with poverty and tragedy. Their vision (that of politicians) is so short-sighted that they cannot appreciate the importance of our ecosystems and thus want to make them disappear under layers of cement". "Chocó is determined by water and the jungle. We are a jungle interrupted by different forms of water. We cannot destroy them just to become a city like Medellín or a country like Spain", concluded Klinger.

In 2014, Afro communities living on the coast of Nuquí devised a legal strategy to protect their livelihoods by preventing industrial fisheries from depleting the resources of the area between Cabo Corrientes and Ensenada de Utria Natural Park, covering 60.138 hectares. They came up with the Regional Integrated Management District Golfo de Tribugá and Cabo Corrientes (DMRI-GTCC[7]), which is an agreement between local communities, state authorities, and fishing companies to set seasons and methods for trawling deep-water shrimp more sustainably. Nuqui´s local communities, whose main source of income is artisanal fishing and tourism, shaped their vision of development in the DRMI-GTCC agreement. In doing so they created fishing standards that have been implemented in other Colombian DRMI as well as in Panama and Costa Rica.

The DRMI-GTCC is based on Articles 70 and 286 of the Colombian constitution, which granted Afro communities as well as Indigenous people the right to govern, within the rule of Colombian law, the territories they have ancestrally lived in. Along with Afro-Colombians, the Emberá Dobidá, Embera Chami, Embera Katío, Guanadule, and Wounaan Indigenous people inhabit the region. They are therefore entitled to ban and foster economic activities in the areas under their administration, also known as “Resguardos” (Reservations) or “Consejos Comunitarios” (Community Councils).

Being declared an area under the administration of local community councils, as part of the DRMI-GTCC agreement, the Gulf of Tribugá is better guarded from the eventual construction of a port. However, president Duque declared the project of "national interest", which suffices to bypass most of the existing deterrents. In the meantime, Colombia's 2022 presidential election poses a possible shift towards a different understanding of the country´s development. Newly elected left-wing president Gustavo Petro has four years to achieve the transformations he promised during his campaign.[8]

Dario Berrio-Gil is a Colombian journalist interested in raising awareness about the effect of our everyday habits on climate change. His interest has led him to publish articles about fossil fuels, human rights violations, and Indigenous people in Latin America. Most of his work has been published by the German broadcasters Deutsche Welle and WDR.

Manpreet Rajput studied Masters of Analysis and Design in Social Protection Systems at the University of Bonn-Rhein-Sieg. She has since worked with vulnerable groups and Migrants.