The Easy Way Out of Rebound Effects 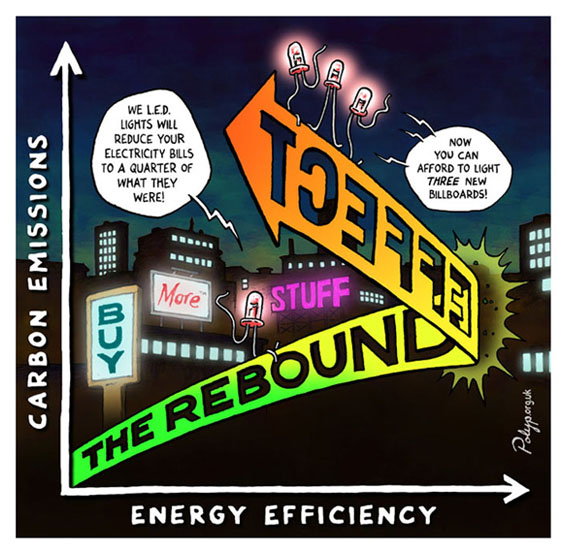 Environmental protection is needed because we take useful things out of nature and put useless or harmful things back in. The resulting depletion and pollution have reached harmful, unsustainable levels. We know that voluntary behaviour change, led by an elite that encourages, fosters and politely ‘nudges’ the masses, won’t do it. Legislated solutions are needed on the principle of ‘I will if you also have to’. Furthermore, and most delightfully, we know how to solve the problems, at least most of them, or at least the big ones. When aquifers, forests and fisheries are overdrawn, caps on their extraction by definition solve the problem. And so, when problematic gases load the atmosphere to more than a certain extent, overall caps on the use, emission or combustion of the offending substances solve the problem with absolute certainty. So policy-makers can grab the great fortune of knowing that we know the dimensions of the problems and the basic structure of the answers. The work can now shift to the social marketing of caps, showing that they are necessary, that they work, that permits will be distributed justly, and that there are ways (we hope) to soften some of the harshness of doing with less.

If the answer is so simple, why then the plethora of other environmental policies? I suppose it has something to do with this harshness, with getting up in the morning and knowing we are legally limited in how much water, space, fuel, meat and mobility we can avail ourselves of. We understandably want to see if we can get results without such unforgiving per-capita limits, to investigate possible painless paths to sustainability. I count six basic non-caps strategies for indirectly limiting the using-up of natural resources and the pollution which together are called negative environmental impact: renewable energy, voluntary simplicity, structural change, population reduction, environmental taxes, and the universally acclaimed star, praised even by Bushes and Trumps, resource efficiency. Renewable energy means rendering humanly useful the energy of sun, wind and water without going through processes of photosynthesis or fossil-fuel formation. Renewables do require silicon, metals, rubber, plastic, water, space, etc., all of which have to be deducted from output and booked as embodied material, but still they could replace a lot of fossil-fuel and biomass combustion. But they don’t necessarily: policy-induced renewable-energy infrastructure increases the energy supply, and both renewable and non-renewable energy systems in fact grow in parallel. Even nuclear fusion, on its own, would not prevent nuclear fission or the burning of biomass and fossils. Voluntary simplicity – sometimes called “individual sufficiency” – means consuming less, consuming only ‘enough’ goods-and-services rather than unsustainable amounts. Pullover instead of room-heating, bicycle instead of car, eating less meat and vacationing locally. This behavioural change however also does not necessarily lead to less resource consumption or pollution: other consumers take up the slack. As long as supply continues, what I voluntarily no longer consume is demanded by my neighbors, or people in poorer countries, or newly-born people. Since lessened demand always means lower prices, and lower prices in turn enable higher demand, overall resource consumption and pollution end up back where they started. Structural change means not consuming less but consuming differently, using one’s unreduced purchasing power on goods or services believed to have less environmental impact per dollar than other goods. Buy a painting instead of a plane trip, buy local instead of transported produce. This strategy most likely also doesn’t work. The hitch is that the artist from whom I buy the painting can then buy the plane ticket I didn’t buy. Furthermore, seen empirically within economies where structural change has in fact occurred towards economic sectors seen as more labour-intensive rather than material/energy-intensive, instead of a reduction we see an increase in material/energy throughput. Population reduction might raise the average welfare of others in several ways, but environmentally, on its own, it also doesn’t work. Consumption is not necessarily reduced because each remaining person can simply consume more. This would tautologically relieve some poverty, and it is true that not having a child is the single most effective thing you can do to reduce your own ecological footprint, but as with voluntary simplicity this strategy rebounds because of lower prices that in turn enable higher demand. Environmental taxes make offending substances more expensive, thus lowering demand for them. So far so good, and every textbook tells you they are equivalent to caps: a cap on petroleum, for instance, raises the price to the level at which demand is reduced to the maximum level that would be prescribed by the caps. The Achilles heel, though, is that the tax revenue gets spent. It amounts to increased purchasing power for the government, in turn amounting to increased demand for all sorts of things whose production requires amounts of the taxed petroleum. Perhaps the whole scheme would merely give the government free petroleum. In any case, without caps, the sky is again the limit; the strategy is uncertain. Technological resource efficiency means making the same amount of goods-and-services, measured by GDP, with less input of water, metal, energy, soil, space, noise, etc. We can redesign equipment so that boiling water, making lumens or moving one ton one kilometer can be done with fewer joules. But the increased efficiency also enables making a greater amount of goods-and-services with the same input quantities, meaning there is no reduction in impact. Uncontestedly, efficiency increases cause economic growth and by now we know that reducing environmental impact requires economic degrowth. This strategy, too, is weak, uncertain, or even counterproductive.

Most technological-efficiency increases are ‘autonomous’. They happen independently of governmental policy, because they result in higher sales and profits. But if governments enact efficiency policies, they must be able to judge their effectiveness. If white goods, lightbulbs, boilers, and cars become on average more energy-efficient, is energy really saved? If someone starts driving a more fuel-efficient car he or she can, with the same budget, either consume more tonne-kilometres or buy other energy-consuming things or services. If steel-making becomes more energy-efficient its price falls and more steel is sold. Thus, to the extent that efficient processes reduce demand for an input, the input’s price falls, and this in turn boosts demand. This is called the rebound effect and if consumption of the newly more efficiently used input ends up at the level it was before, rebound is said to be 100%; all the energy, say, that could have been saved due to the more efficient kettles was used up for other things. In 1865, as first inklings of planetary limits appeared, William Stanley Jevons wrote a book to refute the efficiency strategy. He argued empirically and theoretically that the more efficient use of coal in steel manufacture or steamship transport meant that coal’s price falls, and we can both make more steel and find new uses for coal. He noted the same effect with labour inputs: with the help of machines and better organisation more and more was being produced per hour, yet population and employment were skyrocketing. He claimed even that in the end we consume even more coal than before the efficiency increases, i.e. rebound >100%, admitting this is a “paradox”. But policymakers needn’t concern themselves with whether efficiency measures thus ‘backfire’, because as rebound approaches 100% the policies become first cost-ineffective then simply futile. Policymakers are furthermore entitled to ask economists for proof that efficiency policies bring real savings. For while there seems to be an engineer inside each of us thinking that lower specific input-output ratios must translate into lower such ratios economy-wide, in the policy realm the burden of proof lies not with those who argue rebound is at or close to 100%, but with those who counter-factually claim real savings. Empirically measuring total rebound micro-economically has moreover to date proven impossible. Definitions and methodology are as unclear now as when rebound research took off in the early 1980s: ‘direct’, ‘indirect’ and ‘economy-wide’ rebounds have been identified, each on its own difficult to measure, and it remains murky how they might add up to the policy-relevant quantity ‘total’ rebound. After hundreds of micro-economic studies measuring the price, supply and demand changes amongst individual consumers and producers that are triggered by efficiency increases, estimates still range from a bit over 50% to well over 100%. One direct-rebound study of lighting efficiency even discovered long-term ‘direct’ rebound of several hundred percent! On two points, however, consensus has emerged: total rebound is higher in developing economies and lower in the developed economies where the vast bulk of the studies are made; and it is so high that dozens of studies conclude by calling for the new category of ‘rebound policy’ to ‘mitigate’, ‘minimise’, ‘offset’, ‘limit’, ‘counteract’ or ‘tackle’ rebound effects – usually through taxing the problematic inputs which are being used more efficiently. The whole issue thus remains theoretical. Many engineers and economists assume low rebound unless proven otherwise, while most historians and anthropologists easily imagine that as long as population grows and demand for goods-and-services is not satiated, whatever is saved during one process will get demanded for either more of that process or other processes. The macro-economic empirical route to measurement does remain: one can regress the total consumption of an input, say primary energy, on that input’s efficiency in producing a unit of output (GDP/Joules). A few studies of long time series have done this at world or multi-national scale, thus avoiding difficulties country-scale studies face due to international trade; they regard 100% rebound as probable.

We’ve put the cart before the horse. While causality does not necessarily operate from the right to the left side of the IPAT equation, in the reverse direction it does. Each right-side policy, on the other hand, is highly likely ineffective and in any case requires complex and costly combinations of policies to counteract rebound effects. The caps solution is simple in concept and planning. It requires biophysical knowledge plus some social or political decisions. Real input limits must lead to large changes in population, affluence and technology since individuals, firms and political units would autonomously and de-centrally adjust their behaviour to maximize their welfare within those limits. Family size might decrease, technology would undoubtedly become more efficient, and a measure of individual frugality would become not only necessary but acceptable. This does not deny that in order to set environmental goals (the level of the caps) we can profitably look at the right-side factors. What level of efficiency, for various inputs, is realistic? What amount of goods-and-services per person, given planetary limits, do we regard as healthy and sufficient? What population size and density do we want? Once a desired maximum Impact is agreed, we can calculate combinations of maximum values on the equation’s right side. From the answers we can derive desired caps based on realistic engineering. Then we judge whether they are ecologically sustainable at global scale. This blog post is an abridged version of Alcott’s chapter in the book Sufficiency: Moving beyond the gospel of eco-efficiency published by Friends of the Earth Europe in March 2018. 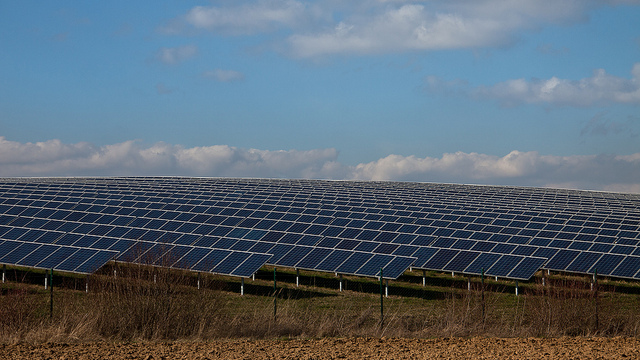