A Conference for Digitalization and Sustainability? Reflections on Bits & Bäume 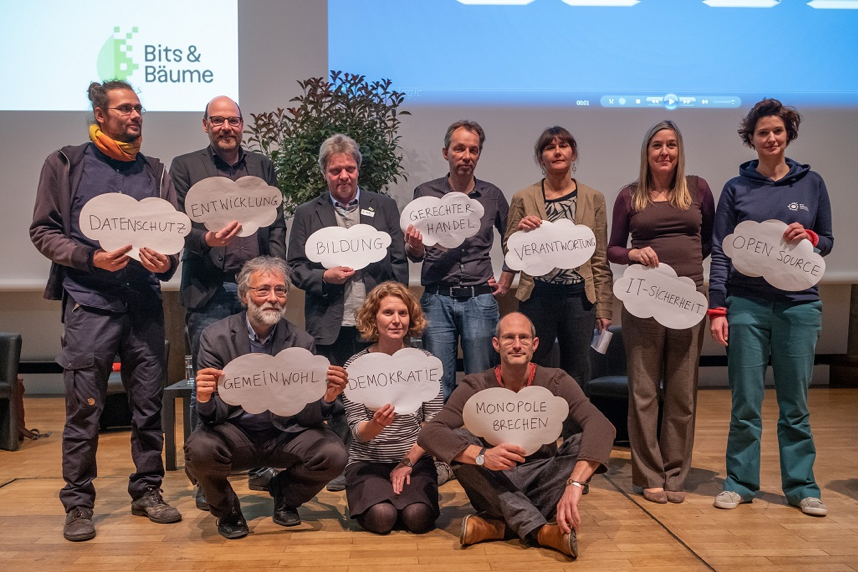 What could an alliance of techies and greens bring for a social, democratic and ecological future? The conference "Bits and Trees" ("Bits & Bäume" in German), which took place in Berlin on November 17th and 18th of this year, tried to shed light on this question. It brought together around 1.700 people interested and organized around digitalization and sustainability. Merely the name of the conference says a lot about the organizers' intention to foster mutual debate and new alliances. The idea came from the observation that despite a widespread interest in both digitalisation and sustainability, there are very few occasions to discuss what these two concepts have to do with each other. The conference was an attempt to address this issue, by setting up a first gathering between communities which share many goals but are not yet working together on a regular basis. The program was organised around seven topical tracks: * "Alternative Economics" in which sustainable and local alternatives were discussed, including Open Source and Free Software, Cooperatives and other economic models, * "Data and Environment" in which the contradictions between data privacy and digital solutions for environmental problems were discussed, in particular concerning digital solutions for the energy transformation, * "Fundamental Issues" in which broad questions were treated, such as the politics of digitalization, its social and economic consequences, or the deep belief or disbelief in technology, * "The Material Basis of Digitalization" in which the environmental impact of hardware production and use was addressed, as well as means to make the conditions of production more sustainable, * "Digital Capitalism" in which the critique of giant data companies and platforms were discussed, along with the debate around automation and the future of labour, * "Smart City, smart Land" in which the dissemination of "smart" devices in cities, houses or farms was analyzed, as well as the impact of digital technologies on mobility, * "Civil Society and Communities" in which the grassroot movements working around digitalization or using digital tools had a place to discuss various projects. Moreover, there was a "Forum" were various organizations and projects could present their work, giving a space for exchange and discussion to all participants. This included NGOs but also local projects, educational films, art exhibitions, and a "chatroom" to allow everyone to network. Ten organisations were involved in the project, representing various aspects of the discussions around digitalisation and sustainability. Among them Chaos Computer Club Germany, Open Knowledge Foundation, Friends of the Earth Germany (BUND), Institute for Ecological Economy Research (IÖW) and Konzeptwerk Neue Ökonomie (Laboratory for New Economic Ideas / Degrowth Hub Germany). For a complete list see the website. Bits and trees - the tech community and the environmental scene - clearly have their differences. However, a broader understanding of sustainability including social justice and individual rights makes for a frame in which many questions are shared among the actors.

Even on topics that seem very context-specific, there were surprisingly many connections to be made. For instance, the massive environmental impact of the current digitalisation driven by large corporations is often underestimated, just as the existence of a strong resistance within the tech community against digital capitalism is easily overlooked. On a broader level, both sides in this encounter struggle with half-hearted attempts to integrate a watered-down version of their criticism in a supposedly social and green capitalism. To see this, consider the many corporations trying to greenwash their industrial activities and global tech-players trying to avoid criticism of the working conditions they impose on workers (see Apple and its contractor Foxconn) or the use they make of their users' private lives (see Facebook and the Cambridge Analytica scandal). Such denials provide common grounds for the tech and sustainability communities to fight together. In addition to showing the connections between the overarching goals and struggles, the conference also helped to identify cases where ecology and technology are already fruitfully combined. For example, environmentalists where happy to learn about open-source solutions to help communal decision makers with the transition to an efficient renewable-energy-mix. Techies were interested in the way environmentalists organized successful campaigns. Civil rights activists from both sides united in their struggles for digital sovereignty.

Towards a shared imaginary

The aim of the conference was not just to discuss the urgent problems raised by digitalisation and the social and environmental crisis, but also to share ideas about what an alternative, sustainable digitalisation could look like. This discussion will continue. It can build on the manifold existing movements that are pushing for a better society, such as the Degrowth or Free Software communities. At the same time, the event showed clearly that much more common ground needs to be built. One of the biggest challenges will be to find a language that engages both communities: since both have their particular topics and backgrounds, it was difficult at times for non-specialists to engage and become aware of ways in which they can contribute. This became apparent during discussions at the conference, leaving non-specialists overwhelmed with information and experts disappointed by the lack of depth. Many events were first steps to the connection of the topics and had an introductory character, which can be seen in titles such as "How much weighs one bit?" (as in: what is the environmental impact of one bit?) or "Mobility and Digitalization". The conference concluded by voicing with 10 demands for another digitization, which can be found below this text (note: translation by the authors of this text, an official translation on the website is in preparation). Make sure to also check out the huge variety of talks and panel discussions, all of which can be accessed on CCC’s very own media platform. Note: a bunch of the videos had simultaneous translation into English (those on the big stage), so don't be discouraged by German titles! The English voice-over can be accessed directly in the video player.

A relatively small group had organized the conference over the last year. Beyond representatives of the ten organisations, a small conference team worked hard for several months on all practical matters, making it possible to host a conference with way more events and participants than initially planned for, with over 100 events.  The preparation itself was an experience in its own right, providing the parties involved with different backgrounds a lot of learnings about differences in culture and common grounds. This process was indeed intended as a collaboration that would set an example for more organisations to connect and work together. The conference was an excellent starting point for the exchange of and collaboration between the different movements. However, creating political pressure will demand a lot more. That means that a lot of work remains to be done. As one of the organizers put it: "This was a nice first date, but now we have to work on making this relationship work." ____________________________ Demands (note: translation by the authors of this text, an official translation on the website is in preparation). Another Digitization is possible! The jointly organized conference "Bits & Bäume” allowed us to initiate a broad and much needed discussion on technology design which serves the common good and peace, takes data protection seriously and promotes social and ecological goals in equal measure. This event, which was a collaborative effort by ten organizations from the fields of digital rights, environmentalism and development policy, hosted over 1,700 visitors, countless sessions, ideas and outstanding use cases. This shows: civil society and a critical scientific community have the skills and the strength to help shape digitization in the long term. We cannot merely leave digitization to business and politics. From now on, we will be even more present and united in both public discourse and practical implementation. Together we make the following demands: Social-ecological objectives in the design of digitization Democracy Data protection and control of monopolies Education Aspects of development and trade policy  IT security Longevity of software and hardware

Call for Papers: Technology and Degrowth

The Journal of Cleaner Production will be issuing a special volume on the topic of technology and degrowth and is looking for interesting scientific contributions. Abstracts of 400 to 500 words can be submitted until 31 August 2015. The special volume aims to both provide 1) a state of the art selection of current discussions of the role of technology within Degrowth in academia and practice an... 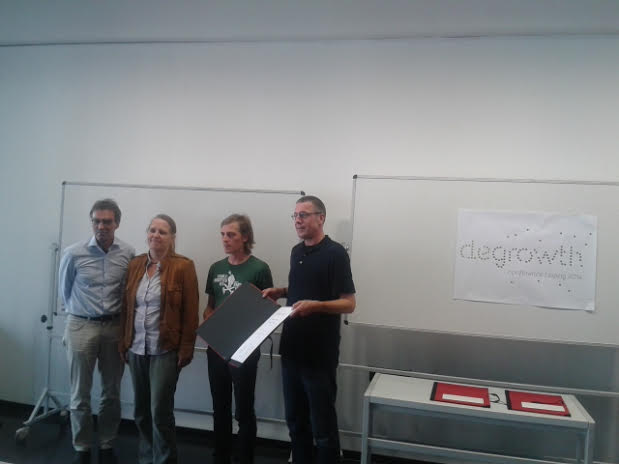