An economic turnaround for Greece – and the whole of Europe 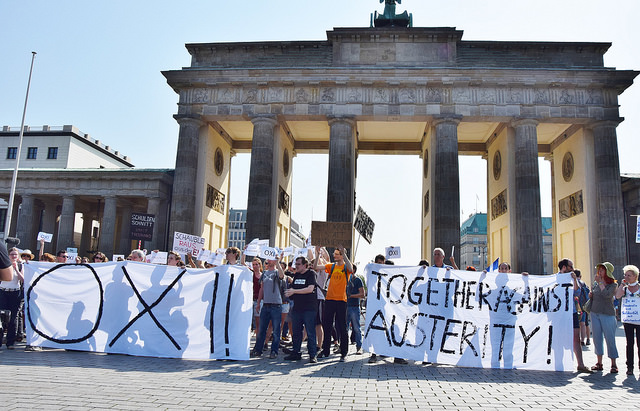 According to recent calculations by the Macroeconomic Policy Institute the Euro-crisis has cost Greece almost a quarter of its GDP. This is the biggest ever recorded contraction of an economy in times of peace. It would be cynical to consider this an example for degrowth (or postgrowth) in Europe. This is certainly not the case. On the contrary, the mission statement of the degrowth movement is "Degrowth by design, not by desaster". The basic idea of degrowth is one of a social, democratic and ecological economy with reduced resource use – and precisely not the type of austerity-induced poverty and recession in combination with ecological ignorance that characterizes Greece these days.

The negative consequences of the efforts to supposedly solve the crisis have made many people in Greece destitute and left Europe at the brink of a humanitarian catastrophe. At the same time, many rich Greeks, supported by other European countries, were able to bring large parts of their wealth out of the country. These attempts to protect themselves from the threat of a complete economic collapse have made precisely this outcome more likely. In sum, social injustice, distributional conflicts and exclusion reinforce each other.

On the other hand, the crisis forces those affected to search for new ways of living and working together while enlarging the scope for experiments. Suddenly, there is a run on projects that were established by anarchist, anti-fascist and social groups years ago, and new ideas emerge. There are self-administered spaces and neighbourhood projects, social hospitals, island economies without money, free shops and various types of cooperatives, workshops and self-help projects. Models based on grassroots democracy and collective work are gaining ground and have become more familiar. Forced by necessity, some people in Greece are getting together to build a social and peaceful society from below.

The conditions for all this, however, are conceivably difficult – and so the largest part of society experiences this shrinkage as a disaster rather than a creative process. Despite the rays of hope, the balance of the continuing austerity policy is disastrous. Between 2008 and 2010 the child mortality rate increased by 43%. General unemployment is at 25% with youth unemployment at 50%. Whole families live on the limited pension of their grandparents, and according to a report by the Greek parliament almost 6.5 million Greeks live in poverty – 58 % of the population! One third has no health insurance, and demonstrations, protests and actions against these grievances are part of day-to-day life – as is their violent suppression by the police.

The people in Greece need our solidarity

Further austerity measures without debt reduction would still worsen the situation instead of solving it. And yet the traditional recipe in the face of a contraction, a spending and investment policy that is solely focused on growth and profit, can be no solution either, as it ignores the distributional conflicts and ecological catastrophe we globally face. What we need is an alternative solution that targets the eco-social problems and their causes in one.

This would mean transformation on many levels: on the personal level, on the level of self-organized groups and the higher level of political institutions. First, the people in Greece need our solidarity directly. We should unite with the less privileged and search for alternatives together. This leads us directly to the second, the level of self-organization: self-administered projects that serve the basic needs of many in Greece require our support. Also, creating and supporting similar projects in Germany or elsewhere can be part of the overall transformational process. Countless initiatives have already started, as the Degrowth-Conference last September in Leipzig has shown.

On the political-institutional level we must strive for an EU-wide solution. This means to identify the causes of the crisis on the European level, particularly those originating in Germany, and jointly develop economic policies based on solidarity. First and foremost, Greece's sovereignty has to be acknowledged. The country must not be forced to implement short-sighted measures that appear to solve the crisis in the short term while ignoring long-term consequences. A debt haircut or extension of debt repayment horizons are necessary to give Greece the opportunity for self-appointed reforms.

Moreover we have to recognize that all European countries have played their part in causing the crisis; for example through the disastrous tax policy and imbalance of trade. The counterpart to Germany’s precarious "full employment" and export championship are trade deficits, casualization and unemployment in other countries. The surpluses of one country are always the deficits of another.

We need the courage to design a different Europe

This is why we need to extend the monetary union to include a fiscal and labour market union. Wages and working time need to be distributed more equally. In addition, a social-ecological fiscal reform all over Europe is essential. This would mean decreasing taxes on labour and basic services and increasing taxes on capital and the environment – while abolishing environmentally damaging subsidies.

On top of this we need to strengthen democratic decision-making structures in the EU. Instead of delegating more and more power to the top and having the fewest people possible decide on the fate of whole societies, we should strengthen the deep-seated EU principle of subsidiarity and take decisions as close to the people as possible.

In order to achieve a long-term and sustainable solution of the crisis we need the courage to design a different Europe. The people in Greece need the support of the European Left. The current crisis management is an assault on social achievements, democracy and emancipatory politics. This is of concern for the whole of Europe, which is a chance to create a solidary, ecological and peaceful Europe. The alternative is to simply watch its collapse unfold.

We all use models in daily life to explain our environment. An example: I assume that a tree will grow provided it has sufficient water, nutrients and sun. I am using a simple model here, without understanding the nitty-gritty – what exactly happens in the roots, stem, leaves and cells. Thinking in models is not only useful to understand our world, but also to solve problems. Let’s assum...

Summer School opens with Clear Vision for Movement and Action 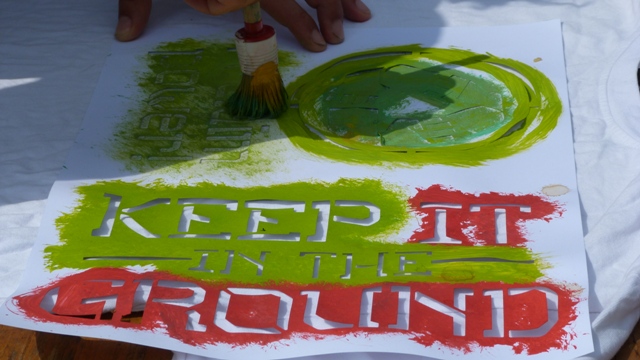 By Christiane Kliemann With the Summer School in the lignite-mining area of the German Rhineland, for the first time the degrowth and climate justice movement are explicitly thought together. This is why the opening panel "No Climate Justice without Degrowth" had the interesting task to draw the very big picture and join the dots between climate change, degrowth, climate justice and the strugg...