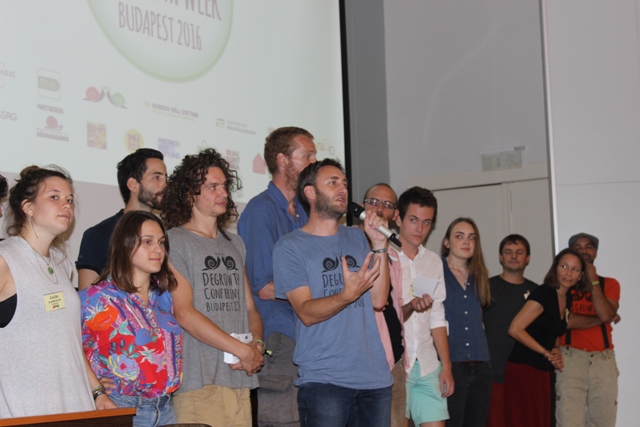 The fifth international Degrowth Conference is over, the call to host the sixth has been opened. A lot could be said about the conference, yet I do not intend to give a comprehensive overview, nor examine how it stands in relation with the former conferences. Instead, I want to share five aspects of the conference, which I found particularly insightful.

1. A Degrowth Conference in Hungary?

In the beginning it seemed quite odd to organize a Degrowth Conference in Hungary, a country that has little history of discussions on degrowth and – as one conference participant pointed out – “has other stuff to worry about”. This improbable endeavor has been mastered successfully – not only was the conference organized with few staff and little financial means, but it was also well integrated in the city and its subcultures. (The parties in various locations of the city were certainly a highlight of the conference.) At the preliminary evaluation at the closing plenary, the conference team concluded that the conference managed to introduce degrowth to Hungarian debates. At the same time, a lot remains to be done: Social media reactions with regard to the conference suggest that it is often negatively viewed – degrowth has for example been associated with communism or backwardness. These critical reactions bring me to my second question:

From my point of view, the existing degrowth concepts have primarily been developed by authors from and for early industrialized countries such as England, France, Germany, Italy or Spain. It would have been great to gain insight into whether these concepts are also useful for Hungary (and other Eastern European countries). Do these concepts need to be adjusted or would it be better to connect them with other existing concepts or movements in Hungary and other Eastern European countries? At least as far as I can tell, these discussions barely took place (with the exception of this panel debate) – which is probably related to the fact that the large majority of participants were not from Hungary.

3. Degrowth around the world?

One of the strongest take-home messages for me was an argument made by Ashish Kothari, an Indian intellectual and activist: He argued that we should not try to apply degrowth concepts to other regions of the world, in particular not to regions with colonial histories. Firstly, because degrowth concepts might crowd out other alternatives to development, since concepts stemming from the “West” are still regarded as important by many (even though they are alternative concepts). Secondly, each country or region has its own peculiarities, consequently requiring its own concepts. Instead of spreading degrowth concepts around the world, we (as degrowth community) should build alliances with similar concepts developed by people from the respective region (see Ashish Kothari’s contributions here and here).

I gained the impression that the opinion that a degrowth transition has to transcend capitalism was widely shared among conference participants. Why do I think so? During a panel on this issue, Daniel O`Neill from the Center for the Advancement of the Steady State Economy argued that, while a zero growth economy is conceivable in a capitalist system, it would lead to disastrous results, and in particular to high levels of inequality. Since a central component of degrowth is social equity, such a zero growth economy within a capitalist system would not be in the line with degrowth ideas. Now, you have to know that Steady State economists are traditionally among the less radical actors in the degrowth debate – at least compared to other voices such as Research & Degrowth in Barcelona. Such conclusions by Daniel O`Neill might therefore suggest a trend towards consensus on this issue. Note that whether or not zero growth is possible within capitalism is not important here. Important is that a non-growth scenario within capitalism would even be undesirable. The bad news is: I believe there are different understandings of capitalism and not all might agree with the one given by Daniel O`Neill. Accordingly, there might also be no agreement on which (capitalist) institutions (private ownership of means of production?, markets?, race-relations?, gender-relations?, post-colonial relations?, etc.) have to fundamentally change. Yet, there seems to be an agreement that it does not suffice to implement reforms – radical changes are necessary. This conclusion is in line with empirical investigations by (1) Dennis Eversberg and Matthias Schmelzer and (2) Ulrich Schachtschneider.

5. More activism for the degrowth community?

I get the impression that an increasing number of people plead for the degrowth community to become more activist. On the panel “Is climate justice possible without degrowth?” Matthias Schmelzer for example argued that the degrowth community can learn from the climate justice movement – in particular with regards to how to achieve political results through activism. In Germany, this strategy has already been trialed: After the Degrowth Conference in Leipzig in 2014, a part of the degrowth community decided to contribute to the already existing climate justice movement in Germany, which has been engaging in activism against lignite-mining for several years. This alliance helped to increase the size and the impact of these protests. Tilman Santarius makes a similar argument in a recent post, pointing out that to become a social movement, more activism would be required.

From my perspective this extension to activism is a sound strategy. But: I would also argue that the degrowth community should simultaneously focus on other strategies of social change. Why? I believe that several strategies are needed for a social-ecological transformation to take place. Also, many affiliates of the degrowth community do not have activist but practical or intellectual backgrounds. Therefore, they are probably better equipped to engage in transformational change in these areas, rather than in activism. Examples would be (1) to connect the existing alternative projects in order to gain political influence or (2) to connect the many intellectuals working on degrowth, in order to push for change in the organization of (higher) education and research – also in order to get more room to investigate how a degrowth society could look like. But: (Attention, teaser!), this argument needs further elaboration, which I intend to put forward in a future post. 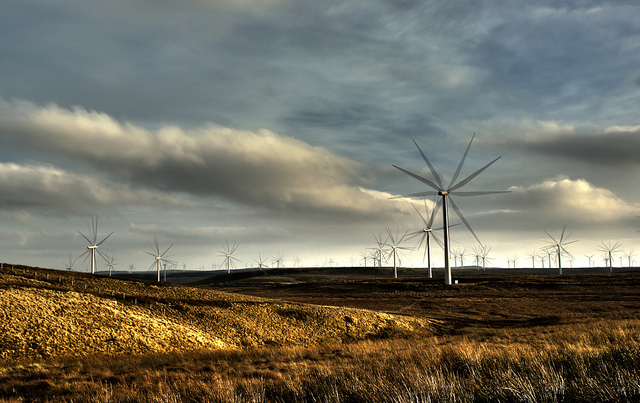 by Almuth Ernsting (Biofuelwatch) Living in Scotland, I should be proud of our government’s energy and climate change commitments. Not of those by the UK government, whose climate credentials consist mainly of slashing support for onshore wind and solar power, handing some €400 million in subsidies to energy companies for keeping old coal power stations open and riding roughshod over mass oppo...

Attempts to integrate economics and ecology have been based on one of three strategies: (1) economic imperialism; (2) ecological reductionism; (3) steady-state subsystem. Each strategy begins with the picture of the economy as a subsystem of the finite ecosystem. Thus all three recognize limits to growth. The differences concern the way they each treat [...]

Learning for Life: Participation in the Transformation of a Commons

This article is written by Claudia G&oacute;mez-Portugal in the scope of the Stream towards Degrowth. As a Mexican activist and promoter of social change she founded the organization SAKBE &ndash; Commons for Social Change and the Free Learning Communities for Life Initiative &ndash; and commits herself to developing communication strategies for social change, effective participation, [...]