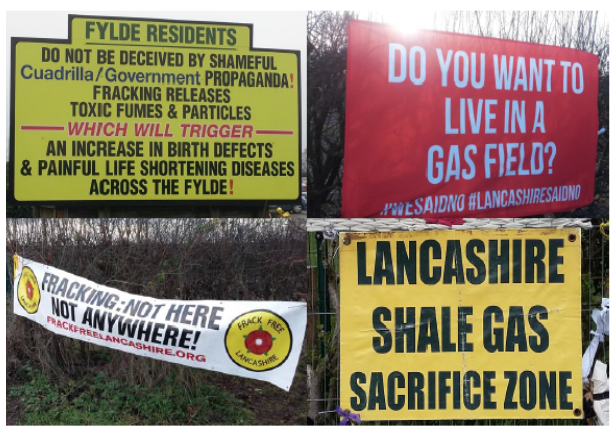 What is the role of ‘sense of place’ discourses in anti-fracking struggles and can the degrowth movement learn anything from them?

This is the question that we set out to answer in our recent paper about the anti-fracking movement in Lancashire, published in Ecological Economics. To understand the role of place in socio-ecological struggles it is important to move beyond the conventional view whereby places are reduced to physical locations. Instead, space becomes a place when actors ascribe physical locations with specific meanings, experiences, memories, emotions, and symbolic value. Human geographers refer to these socially constructed aspects of place as sense of place, which form the basis of collective (political) identities, cultures and practices. Because senses of place are always in flux, as well as contested, it is important to pay attention to the politically-charged dynamics surrounding place-making processes and discourses.

In the context of Lancashire, a County in the Northwest of the UK, the fracking controversy was markedly framed around place issues. Pro-fracking campaigners attempted to exploit local residents’ anxieties over neoliberal globalisation, the dislocation of  capital, and place decline. These anxieties were channeled into discourses of place-empowerment, identity, and heritage through visions of a fracking-impelled industrial renaissance. For instance, Cuadrilla - a privately-owned oil and gas company with major shareholders in Australia, the United States, and Hong Kong - launched its “Putting Lancashire First” campaign in 2016. This international ownership notwithstanding, the company's discourse relentlessly promoted the idea that their business model prioritises the needs of ordinary Lancastrians (e.g. working people, community groups, small businesses, etc.), while simultaneously downplaying its own commercial interests. By repositioning the company as Lancashire's indispensable ‘friend’, ‘partner’ and/or ‘ally’, pro-fracking actors portrayed Cuadrilla's main role as that of providing residents with the technological and business know-how to unlock valuable natural sources, in this case shale gas, which are rightfully theirs to exploit.  Moreover, and perhaps most importantly, this symbolic connection between Lancashire and Cuadrilla was strategically utilised as a rhetorical weapon to cast any resistance or opposition to fracking as an attack on the place and its interests.

So how did anti-fracking campaigners deal with this challenge? They developed their own place discourses, and embedded them within a broader campaign based on a plurality of strategies and tactics- e.g. public outreach, legal challenges, direct action etc. Anti-fracking activists countered the pro-fracking campaign slogan “Putting Lancashire First”, with their own version: “Destroying Lancashire First''. Anti-fracking activists constructed fracking as a “threat to place” by emphasising its negative impacts on public health, the local economy, and the environment. In addition, anti-fracking discourse successfully blended the above with underlying fears and aspirations regarding place-sovereignty. From this perspective, Lancashire's empowerment, agency, and democracy were defended not by accepting fracking, but by opposing it. At the same time, they provided an alternative vision for Lancashire’s future based on a Green New Deal, which could respond to local concerns about jobs and place regeneration.

However, perhaps the most relevant insight from our study is that, whilst place constituted a potent motivational theme for anti-fracking activism, sense of place can transcend established scales and boundaries. In line with their campaign slogan “Not here, not anywhere”, activists worked hard to avoid reducing anti-fracking resistance to a not-in-my-backyard (NIMBY) issue by stretching the boundaries of place beyond Lancashire. They built alliances and shared experiences with campaigners in other locations and communities affected by fracking, creating new meanings, connections, and relations of interplace solidarity. The sense of place underpinning anti-fracking activism in Lancashire was gradually enlarged, paving the way for the emergence of what the late Doreen Massey termed a Global and Progressive Sense of Place. The latter entails a greater appreciation of, and emotional connection with, the complex interdependencies and global relations that constitute the places we inhabit and care about.

Our research concludes that degrowth-minded activists must handle their place-politics with creativity and care. Sense of place is an open-ended construct, which is fluid and rich in possibilities. These possibilities are not exhausted by pre-existing territorial boundaries and cultural demarcations (e.g. nations, regions, cities, etc.). Although our sense of place might be partly shaped by history and geography, it needn’t be enslaved by them. Therefore, degrowth activists might tap into the pragmatic possibilities created by already existing place boundaries, attachments, and identities, while simultaneously aiming towards the more utopian aspiration for a global sense of place which would transcend them. The latter is most necessary if we are to deal with the complex challenges of the Twenty-first Century without succumbing to resurgent nationalist sentiments and right-wing populism.

To find out more about the paper, please read here.

Javier is a Senior Lecturer in the Department of Marketing, Retail and Tourism at the Manchester Metropolitan University Business School. His research interests lie at the intersection of Degrowth, Sustainability Marketing and Critical Marketing Studies. Javier’s work has been published in leading international journals, including the Journal of Consumer Research, Marketing Theory, Ecological Economics, Organization, and the Journal of Macromarketing.

is a PhD student in Manchester Metropolitan University’s Business School. He also holds research positions at the Universities of Essex and Bristol. His interdisciplinary research interests include the political economy (and ecologies) of environmental conflict, degrowth, and transformations towards sustainability. This research draws on a variety of fields including ecological economics, political ecology, political economy,  and human geography. His work has been published in Ecological Economics.