Degrowth Politics and Policies for Degrowth

Making sense of inputs from the Budapest Degrowth Conference

The degrowth community in Budapest and other forums formulated a number of concrete policies and identified alliances with other movements. Acknowledging the diversity of perspectives and a more concise set of proposals by Research and Degrowth, this article puts together a number of policies and proposals consistent with degrowth. These are policies that either contribute to reduce societies’ throughput of energy and raw materials, or help people and companies to understand their impact and contribute to social equity. The proposals below are a synthesis of collective reflections in various degrowth fora; mistakes are mine.

As a provocative minority and plural community, degrowth would die in internal conflicts and face political irrelevance if it were to present a full political proposal by setting out a coherent and complete set of policies for a new society. While degrowth may inspire a “new left” alternative to the extractivist and growth-led model of recent Latin American left government experiences, the construction of a fully-fledged alternative or the political agenda of a minority party should not be the priority. Instead, degrowth should speak to existing political forces and engage with policies that can be implemented by existing governments (at various scales).

Autonomous groups searching for alternative ways of living and experimenting with degrowth-inspired forms of living outside the mainstream economic system offer interesting experiences to their participants. However, these attempts do not offer a way forward for the implementation of degrowth in the wider society where most people live. Therefore I argue that degrowth should find a way to operate within and shape the existing political space. Degrowth politics needs to support other groups or actors in specific proposals which embed some of the key degrowth principles. These may be policies on various scales and at different levels of radicalism. Some of these would explicitly acknowledge degrowth principles. Others might have been designed with different intentions, while their outcomes are nevertheless a contribution towards degrowth.

Within current society, taxation and regulation are some of the most effective tools available. Given that people have complex lives and little time to study and evaluate every consumption decision, the appropriate and critical use of behavioral economics principles is key to help people reduce their consumption of nature. It is also important to acknowledge that many policies only make sense in certain contexts and might be irrelevant or need adaptation in others.

The entry points for degrowth policies are multiple and the connection is not always obvious. Some important degrowth policies need implementation at national level and others on international scale. Often, a particularly productive scale seems to be the city level. Cities offer the possibility of a direct and democratic political participation, and collective decisions on city-level can significantly change city metabolism and reduce throughput of energy and raw materials.

The degrowth community should praise all of these policies, acknowledge their contribution towards a degrowth society and build alliances with people whose choices and action are critical for degrowth. For example, a significant part of the vegan movement is a movement of compassion for animals, rather than grounded in ecological motivations. A dialogue with the vegan movement could help add a new important ally whose lifestyle practice can greatly contribute to degrowth. At the same time there is a sharing of values and a cross-pollination that could potentially strengthen degrowth. Phisosophically for instance, veganism rejects all forms of human discrimination from an animal rights perspective. Like others it is a movement of the left who seeks justice in broader terms, and is inherently anti-racist and feminist.

The role of banking and corporate debt as a way to force companies into a continuous growth process in order to repay interests and generate profit is a key focus of degrowth analyses which explore the impact of current monetary and debt system. While a radically redesign of such a system is unlikely under capitalism, banks could be made liable for the environmental impact of their credits. The example of some multi-lateral investment banks who already undertake social and environmental impact assessments before funding projects could be extended to all banking credits and push for stricter assessments and liabilities.

This would be an overall policy goal, broken down into some concrete proposals of what this might mean:

It is fundamental to refuse (or heavily tax) the import of products that pollute in the course of the production process. Taxes should be levied at the final point of purchase so that companies cannot avoid them by producing in less regulated countries. Such measures may include agreements to spend such taxes in ways that also benefit the citizens of the producing countries (e.g. environmental protection, initiatives to address climate change).

Trade agreements are key to the existing economic system, and thus need to embed concerns regarding the consumption of nature and climate change.

A number of companies and some countries are experimenting with the significant reduction of working hours. Most contracts in the UK Charity Sector are already 35 hours per week. This may also be facilitated by reduced labour costs due to lower taxes on labour.

Inheritance could be limited for example to 10 million euro per child, sibling or spouse. This would still mean 1,000 euro per day for over 30 years.

In countries such as the UK, the summer season is unpredictable and often short. So people plan holiday in southern Europe to enjoy some guaranteed sun, while often struggling to benefit from the few days of sunny weather on working days at home. Moreover, air-conditioning in offices significantly increases energy consumption on some of the hotter days.

Exploiting the accuracy of weather forecasts, city councils could declare bank holidays, discretionary when weather conditions are particularly good. In many countries, governments already declare national holidays when major events happen, e.g. death or birthday of a head of state. This policy would improve well-being of the citizens, have positive health benefits, and possibly reduce overall energy consumption and traffic while reducing production by fewer working days.

A very serious product certification system should establish the ecological footprint of every product and service. This would be part of the labelling in order to make it easier for consumers to understand the ecological impact of their consumption choices in a transparent and robust way.

There are already labelling rules: in some countries, every product has to indicate high levels of sugar, salt, and fat. The new labelling system could tell you that a product is equivalent to 10% of your daily fair ecological footprint allowance. This would allow consumers (individuals but also companies and public sector) to choose a product not only based on price but also on ecological criteria.

Many industries, particularly within the EU, already have very complex regulations and standards, for instance around food safety, but fail to capture the most important dimension of nature consumption. The EU has an eco-label programme and has already developed eco-labelling guidelines for some sectors. However, it is a voluntary program, little known to the public, and only provides very limited information to the consumer.

Only when people will be able to assess the ecological costs of a product that they can understand what is actually convenient. It is also a way to translate the bio-physical limits of the planet into everyday life.

The certification process should be managed by an independent agency with an internationally agreed methodology. Such transparency and certification might then lead to policies encouraging certain consumption patterns and incentivising certain types of production.

A labelling system such as the above may take a long time to be approved. However, there are already civil society groups who work on assessing products on the basis of their reparability, durability, capacity to be updated, software support, provision and pricing of spare parts, and official repair guides. This work put pressure on companies and calls for the introduction of reparability standards in products. Such organisations and movements around repairing, for instance iFixit or Restart on the electronic repairs, are important allies of the degrowth community. They change the culture and people’s consumption patterns, while concretely reducing the need for new products and advocating for more repairable and durable products. There is also an aspect of learning new skills and labour intensive activities which contributes to reduce overall consumption of nature.

It is not only important to lower taxes on labour but also on services which lead to an overall reduction of energy throughput and other materials. There is a proposal, for instance, to remove VAT or other forms of taxes from repair work, with the possible exclusion of products such as cars. Sweden and other countries are already implementing policies in this direction.

Advertising and media portray owners of big/costly cars as successful and powerful. Ownership of big cars should be portrayed as what it is. It should be associated with people compensating a sense of inadequacy in a society that construct a perverse mainstream masculinity.

If you drive an SUV in a congested city constantly beyond acceptable air quality limits (which in London causes over 9,000 deaths per year) you are a selfish, not someone to emulate. Similar changes over the last years have taken place with parents smoking in cars with children, with people drinking and driving. These behaviours had been celebrated in popular culture and movies but are now strongly seen in a negative light and sanctioned. The same should happen in the field of other harmful consumption behaviours.

A strong body of evidence indicates that measures at national level promoting specific social norms can change behaviours of individuals. The education system also plays a key role building social norms. If resources are invested in changing social norms about consumption and identifying new representations of well-being and success through institutions and schools, people’s aspirations will change into something different than material consumption.

Fees on plastic bags, congestion charges, car-free days are important reminders that there are limits to our personal consumption to allow others to live in the same environment. These are very limited measures. However, these small behaviour-change measures have a very important educationalrolelike the following two proposals.

In many cities, the problem of air pollution is more and more recognised by city authorities. Measures to limit personal car use would involve incentives for alternative mobility, e.g. low speed areas, congestion charges, etc. These campaigns are often framed in terms of public health. This certainly also resonates with degrowth claims.

Policies in different countries have led to very different packaging behaviours. Some countries are exponentially better than others. In this field, any intervention towards reduction or reuse of packaging is important.

In many EU countries,short-haul flights are significantly cheaper than trains. This is despite the fact that railways have been built with huge public funding and produce a much lower level of emissions. This is partly due to the difficulty of taxing flights and aviation fuel. A number of proposals, including a European Carbon-based Flight Ticket Tax, can help redress the huge incentives that air transport currently enjoys.

In our towns and cities, it is increasingly difficult to find spaces to socialise that are not linked to consumption. Socialising spaces are increasingly privatised where the owner needs people to consume to sustain the space. Even public spaces are often tendered to private companies and transformed into consumption spaces. An investment in public spaces designed for citizens to interact and engage in relationships without necessarily involving consumption is needed.

Do get in touch with criticisms, other proposals, suggestions, etc.: Andrea Rigon (andrea.rigon@ucl.ac.uk) 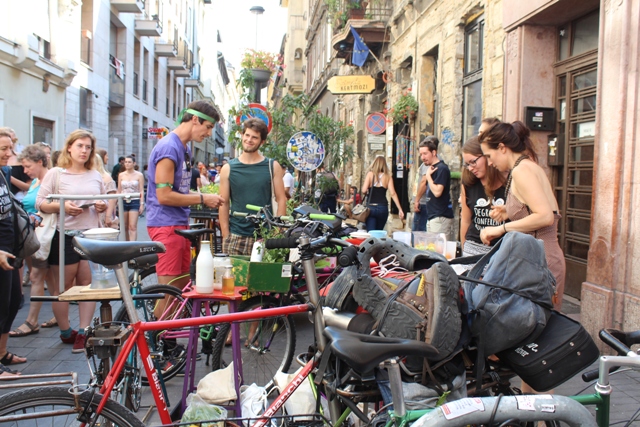