How to Integrate Degrowth into All Aspects of Life: Some Thoughts on the Budapest Conference 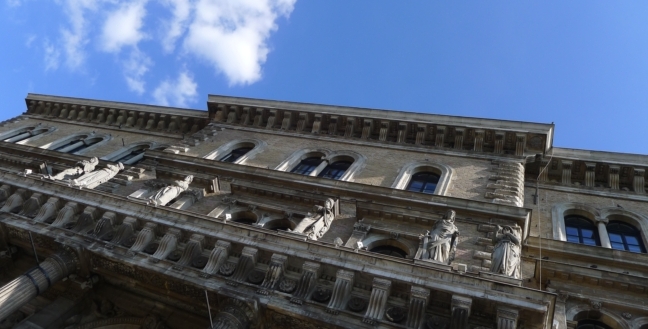 The picture above shows some of the statues decorating the northern entrance of the Corvinus University in Budapest where the recent Degrowth Conference took place. The building has not always been a university. It once was a place of trade, and the statues over the entrance depict virtues which, back then, were considered central to trade. Virtues like courage, faith, love and honesty. When did trade loose them? And how could the bear and the bull become dominate images for trade instead, like those in front of the Frankfurt Stock Exchange?

I'm writing this from the train on the way back from this very conference, still full of impressions and exhausted from five long days of listening, thinking, discussing and socializing. Instead of giving a full overview of the conference, however, I'll try to give some impression of challenges identified, encouraging steps made and also make some points of what is needed for those conferences themselves to be as 'different' as we want degrowth to be.

As I was part of an observer team that had the task to make notes about every conference day, I'm in the lucky situation of already having some notes ready for this post. The first task waiting for me every evening of the conference was “List the key challenges for degrowth that you could identify in the discussions today (if any)”. I managed to identify some new ones every day. One thing I learned is that fighting degrowth's powerful opponents is a key challenge for degrowth. The speaker, forgive that I forgot who it was, even named them for the audience: they are those powerful institutions and corporations which are in favour of growth, BUT ALSO and very importantly, our own comfort. To be able to advance towards a socially just and environmentally sustainable society we need to leave our comfort zones. This not only includes a radical change towards a less resource intense way of living for most people in the global north, but also a radical change of our understanding, our imaginary. Another obstacle for reaching such a societal shift is our fear of failure when we wish to swim against the stream or our shame or insecurity for being and thinking different. Next to these, there are obviously many more practical challenges. Be it the challenge to get into dialogue with groups that are so far largely absent from degrowth activities and debates, such as for example refugees or workers unions. Or be it the challenge of introducing topics that were so far missing in the scientific debates.

It was not really necessary to go to the Degrowth Conference to find out about positive developments that have happened in regards to degrowth. Such are visible in many places if only one starts looking for them. As also mentioned in the opening event, degrowth is increasingly visible in the public and scientific debate. It is mentioned or discussed on blogs, in newspaper articles, in books and many academic papers. There are more and more events, be it lectures, activism or practical approaches, that in some way or another relate to degrowth. But even though this is visible without the conference, one side effect of the conference is of course, that many initiatives and thoughts on degrowth which are out there are brought together in one time and space and therefore become more visible. Seeing and experiencing this is already very encouraging as such.

What is also encouraging when looking at this diversity is best said in one phrase I came across in a presentation: we get “more and more 'degrowth-now' initatives, ideas, sessions, research and projects and not only 'degrowth-in-the-future' discussions”.

Another positive observation I could make when looking at the conference from a scientific angle is the following: Even if anthropology and other qualitative social sociences are still in a minority in the Anglo- American scientific debate, they are joining in and are warmly welcomed. And there is still a lot of potential for anthropological research practice and perspectives to contribute to degrowth debates. One way is certainly by shedding light on the many “new/old sociocultural systems driven by motives other than growth” and, more importantly, the tools and ways of defamiliarizing the familiar used in anthropological research. Anthropological practice, by letting us step aside and letting us look at our own identity and at the spectacles we always wear, makes the challenge of leaving the comfort zone one possible to overcome.

So what was missing at this conference to make it in itself as 'different' as we want degrowth to be? Above all, it was that type of one-way knowledge trafficking. What do I mean by this? Several aspects: First of all was the event divided in the so called Degrowth Conference and the Degrowth Week. The conference was a scientific event and the week was for the rest. Or as it was put at the opening event: the boring part is “closed”1 the exciting part is open. After having attended the five days, I have to disagree. The closed events were not boring and they could have been even more exciting with a more diverse audience. Having only scientific formats at the conference led to mainly having university people, be it professors or current or former students, at the event. Now one might wonder what is the problem with this. The problem is that it reproduces the way recognized knowledge is produced in our time. To put it plain and exaggerated, scientist produce the knowledge for all and what the rest knows does not count. What was already practice in the last Degrowth Conferences and hopefully will be so at future Degrowth Conferences was to give room for interaction of scientists, activists, practitioners, artists and whoever else cared to engage. This can be a way to transcend boundaries and to act towards a different scientific practice, and only by doing so we can contribute to creating a different society. At the same time, it is not enough to just let non-scientist people join the conference - there also needs to be a wide range of formats beyond the classical paper session. There needs to be more time for discussion and for hands-on experimenting, open spaces where topics can be taken further outside of the fixed programme. There's a lot more that could be said on this, but that must be done at another time. The train ride is almost over and I want to carry on with something else: the Degrowth Week.

The Degrowth Week had a variety of workshops in various formats. Panels, movies, hands on practices like t-shirt recycling or creative writing, there were tours, discussion and concerts. Events took place at the university, now open for everybody, and in several locations in the city of Budapest. By localizing the events in buzzing alternative projects done by locals, it seemed that degrowth really got carried into these projects. I would not say into the city, for it is just to large for this. But one important aspect of Degrowth Conferences in general is that they spread degrowth ideas and practices at the location the conference takes place. And organizing the Degrowth Week together with those existing places was a great way of doing so.

1The conference was only open to registered participants. One could register if one had handed in a somewhat scientific contribution or by getting one of the few other places by appling.

A collection of Giorgos Kallis´ articles now available as e-book The first time I heard Giorgos Kallis speak was in Lisbon about ten years ago at a meeting of the European Society for Ecological Economics (ESEE). He has remained faithful to this field, contributing to the exciting debates on an ecological macroeconomics without growth or “prosperity without growth”. In Lisbon he did not yet ta...

Degrowth is usually translated into German as "Postwachstum" (post growth) or "Wachstumsrücknahme" (reversing growth), but it can also be translated as “ausgewachsen” (grown up). This captures two aspects: on the one hand the end of growth and on the other hand the entry into a stage of maturity, namely adulthood. Adults are expected to show increased maturity and responsibility for themselves ...

Leben im Bauwagen [Life in a Bauwagen (construction trailer)] from Marc Menningmann on Vimeo. During the Degrowth Conference in Leipzig in 2014 the photographer Niko Baumgarten opened his Bauwagen for passers-by. Anyone interested was invited to get some impressions and to look at his picture series "Welcome Home", which deals with alternative ways of housing.