Was documenta15 a Degrowth Art Event? 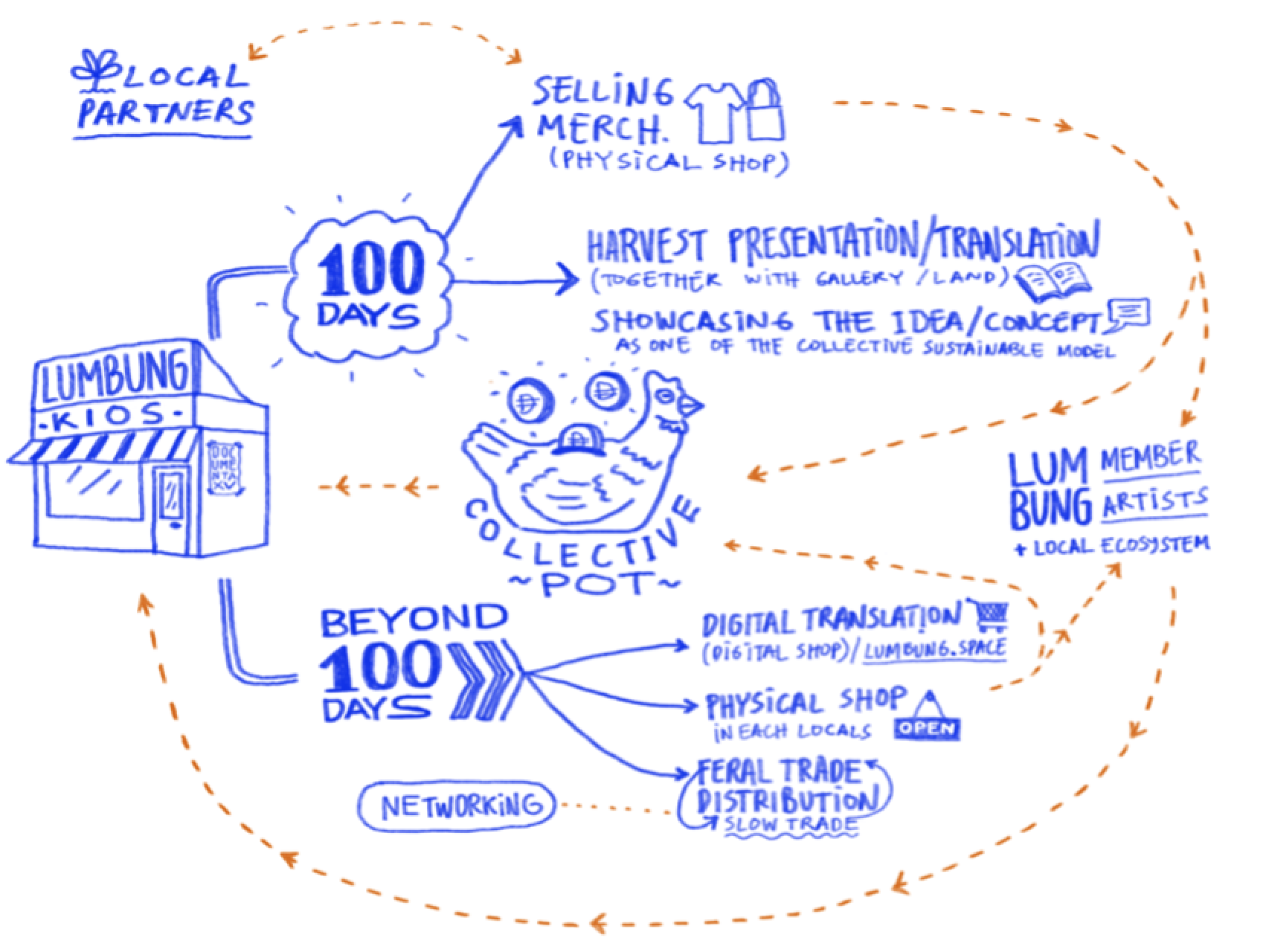 Documenta15 is experiencing turbulent times. Having arrived in Kassel on one of the hottest days this summer, it was difficult for me to climb the steps of Friedercianum without thinking about Palestine, Israel and the shocking responses of the documenta art directors after accusations of anti-Semitic tendencies against the collective Taring Padi. The lack of engagement by the documenta gGmbh representatives highlighted the cultural chasm that Germany is assumed to have overcome in the aftermath of World War II, as written in the New York Times. Amidst the heat of such debates, especially in the German context, it is easy to deep-dive into one discourse and ignore the rest of the exhibition. This is currently happening with documenta15. The art shifted towards the back-end of social media platforms and the world is perplexed: does documenta have nothing else to offer?

The answer to this question comes as a relief. It does. Documenta is known for progressive conceptualizations of art: critical, socially engaged, and investigative. Some love it. Some hate it. This was the case at documenta7 where sculpturer Joseph Beuys created a forum for political debate called the Free International University. This was the case when documenta was founded in 1955, following the ethos to emancipate from the dark period of Nazism. Documenta is political, and restricting the discourse to one topic is deceptive.

The debate around documenta15 has rapidly evolved into its own ecosystem. My intention is not to contribute to the (oversaturated) documenta discussions around artistic autonomy, or the nuanced dynamics of post-colonial art. I will analyze the practices of curation and art-production by Ruangrupa, as degrowth elements are most visible in those. Hopefully, this can further foster a dialogue between degrowth and the arts.

Not just another documenta

Documenta15 is curated by the Indonesian art collective Ruangrupa. Founded in 2000, Ruangrupa (translated to Space for Art) is a non-profit organization known for their capacity to convincingly mediate art to a diverse range of groups. Ruangrupa is the first artists collective to ever curate documenta, and one of the first curational teams from the Global South.

Many things were different at documenta this year. Ruangrupa communicated they wanted to counter and re-structure every single notion attached to an elitist, hyper-capitalist art industry that appropriates all understandings of art with a Western lens. The biggest indication for such motivation is the re-naming of the whole event: documenta15 is called lumbung, the Indonesian term for rice barn. In Indonesia, surplus harvests are stored in rice barns to be communally distributed among the community members, according to jointly defined criteria. This practice is deeply embedded into how documenta is organized this year. To link this organizing principle to degrowth, the following paragraphs will examine how Ruangrupa integrates the degrowth concepts of commoning, sufficiency and de-centralization into the curatorial process, respectively.

The Collective Pot
How do you revolutionize a mega-art event in the heart of Europe, where art must be beautiful, grant schemes generate a handful of God-like superstars, and the audience is used to consuming rather than participating? Ruangrupa began with a radical re-allocation of funding. Money was re-interpreted as a transparent common. Concretely, each participating art collective was given 180.000 Euro with 25.000 Euro paid upfront, recognizing the previous work art collectives have undertaken in their communities. Triggered by a discussion around providing a basic income for the artists, 20.000 Euro per participating group were placed into collective management, with artists autonomously deciding how to utilize it in the exhibition (Documenta Handbook, p. 21).
Coming from contexts where states refuse to build “support systems for art and culture” (Documenta Handbook, p. 24), collectives formed an economy working group to experiment with new models of financial provisioning beyond the static institutions. The results of this process were the lumbung Kios, a self-governed space for visitors to purchase small objects made by the artists, and lumbung Gallery. The collectively managed lumbung gallery sells art works based on the artists’ needs and protects itself from financial speculation. The gallery includes non-monetary exchange and affordable art works, too. Revenues will be distributed to projects which fight the privatization of land and focus on a combination of agriculture, biodiversity, culture and the spiritual. Those venues are the strategic tools to sustain a lumbung culture even after the 100 days of documenta.
Those degrowth methods of financial operation and commoning stretched the limits of some of the collectives. Ruangrupa communicates that some of the collective money was interpreted as owned. The reason for this was, allegedly, that Ruangrupa did not frame it as a total collective sum of money, but as 20.000 Euro for each art group (Documenta Handbook, p.21). Framing it as communal money would have, however, created other problems, according to Ruangrupa. For example, artists did not want to rule over the budgets of other artists who missed some of the strategic meetings (Documenta Handbook, p.20). This indicates the difficulty and time needed to effectively govern the commons.

Sufficiency with a Touch of Circular Economy
Wolfgang Ullrich argues that emerging artists no longer view freedom and independence as societal progress but instead focus on the elimination of global crises like inequality or climate change. Linking this hypothesis to documenta, Ruangrupa writes that sufficiency is a central principle in the curatorial process and aftermath of the event. “Less” is not necessarily seen as worse if it implies emancipation, justice or ecological sustainability. This is what we saw at the Hübner Haus, one of exhibition venues of documenta15, where a huge map of repair and re-use initiatives in the cultural sector was displayed. One example was Kostümkollektiv, a Berlin-based prop room for old costumes. Kostümkolletiv stores and repairs garments from theater performances and lends them to artists for a low price. The collaboration with projects like these demonstrates some substance behind often empty promises of a circular economy, more directed towards sharing and sustaining and not techno-optimism and efficiency.
This approach was paired with a mentality of slowness in the curatorial process. The vast number of collectives (and collectives inside collectives) required many meetings for trust to be built and decisions to be executed. While concerns for an unfinished exhibition were raised, with Covid as a major barrier, it was not interpreted as a problem per se, as democratic and collaborative decision making was prioritized over the finalization of perfectly curated output. Roaming through the Friedericianum, I could sense this temporality by playing with interactive charts and sketches. The exhibition was dynamic. In order to make it “the least extractive documenta could be” (Documenta Handbook, p.30), Ruangrupa did not require artists to generate novel work. Instead, they asked artists to keep engaging in their communities with the approaches they are familiar with (Documenta Handbook, p.30). What mattered for lumbung is the process of art-making and how this eventually cycles back to the communities the artists operate within, which is a fruitful perspective on sufficiency as a degrowth principle.

De-Centralization and Collectivity
Participating artists and collectives were de-centrally placed into majelis, autonomous collectives inside the larger collective. I would hypothesize that multiple layers of decentralization exist at lumbung. Many working groups (e.g. the Economy Working Group) further split into lower-level working groups who would operate autonomously. Occasionally, Ruangrupa collects all majelises together to form a general assembly, attended by 150-200 participants. This structure reminds of the vision of collective self-determination by degrowth philosopher Cornelius Castoriadis, which is understood as a democratic governance system in which all members of society can set agendas and rules.
A second element of de-centralization manifests in the geographical selection of venues in Kassel. Documenta curators have usually confined the most important art to the central locations at documenta Halle and Friedericianum. This year, Ruangrupa wanted to emphasize the wider eco-system of Kassel without confusing visitors who are unfamiliar with the outskirts of the city. Therefore, during an Artistic Team Assembly, the city was equally split into Social, Industrial, Natural and Capital, and artists were eventually allowed to pick the venues they find most suitable for their practice. This way, visitors could explore calm and slow parts of the city, as well as empty factories and post-industrial sites. My personal assumption is that this strategy also helped to equally share the touristic benefits of documenta to restaurants and bars which have been ignored in previous editions. Frankly, documenta is still city marketing by the book and a mega tourist attraction, but Ruangrupa made the effort to distribute the impact to the different parts of the city.

Challenges for Degrowth Through the Experiences from Documenta?
Despite the fact that “degrowth” was never explicitly mentioned in the exhibitions, I would conclude from my visit that Ruangrupa followed many degrowth practices. The experimentation with money as commons, the aim for ecological sustainability via sharing and re-using, and the decentralization of governance structures are all indicators for a lived degrowth experience. It is clear Ruangrupa did not use their appearance at documenta to promote themselves, but to support their personal communities in Indonesia (and enable other collectives to do the same in their respective context). Yet, it is unclear how the experiences in Kassel, no matter whether negative or positive, will shape the future of both the practices of participating artists collective and the strategic direction of documenta gGmbH.
In the process of my visit, I came across the huge internal struggle of the exploitation of art mediators by documenta gGmbh. They only receive minimum wage and no institutional support, which oddly diverges from the progressive strategy set out by Ruangrupa. Since I cannot clearly find causality between the failure of documenta gGmbH and the approach by Ruangrupa, I can only ask questions: Could Ruangrupa have put more pressure on the institutional documenta team to embrace the lumbung values? What role did power play in the frictions between documenta gGmbh and lumbung? One can only speculate, but there is an important take-home message for degrowth: if we want to understand how degrowth can be made a lived experience, we should not look at static institutions. Ruangrupa says states have failed, art critics state documenta has failed. Therefore, it is so crucial that lumbung will stay alive after the 100 days of the Kassel exhibitions, because it was not documenta which was degrowth-like, but lumbung. I imagine how much clout would be gained if daring artists, activists and heterodox economists would join forces and share their diverse experiences for a socio-economic transformation towards degrowth. Do we need a Western institution for this?

Julian Willming is PhD candidate in Cultural Sociology at Leuphana University Lüneburg and studies the linkages between artists, their lifeworlds and degrowth. He works in the CLAMOR research project and is a practicing artist-researcher focusing on Performance Lectures. 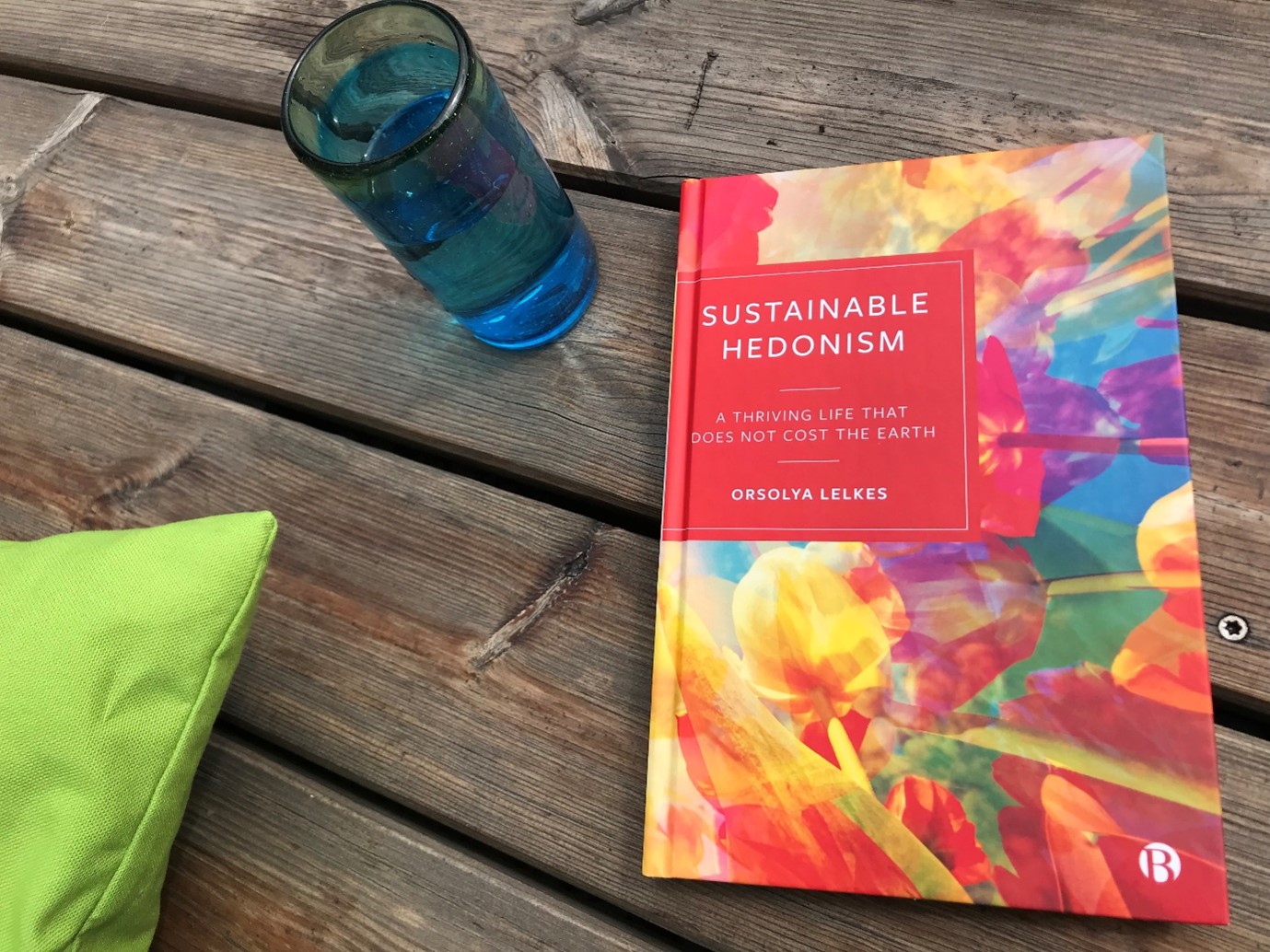 The notion of sustainable hedonism appears at first to be a provocation. Is it a paradox? Is it just more greenwashing nonsense? It is meant to puzzle, to perplex, and to propel. Sustainable Hedonism. A Thriving Life that Does Not Cost the Earth is a call to reflect on our beliefs and actions related to pleasure, joy and ecological sustainability.